TasteSpirit is happy to announce that Ian D’Agata accepted the position of Chief Scientific Officer (CSO) of TasteSpirit in December 2019. 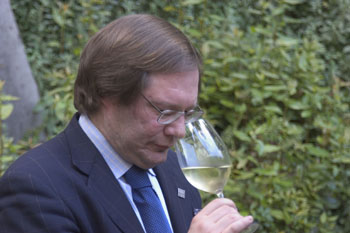 After a forced hiatus due to the global Covid pandemic, Ian was able to finally join us at the beginning of October 2020 where he is leading a series of projects including the creation of a new terroir-based wine school and being Editor-in-Chief of the new, soon to be launched Terroirsense Wine Review, a digital international wine magazine that will cover the world’s wines and featuring a limited staff of well-known world class wine writers and experts and a new generation of young Chinese wine professionals formed by Ian to become leaders in the field of wine and food communication.

We have known Ian for ten years and have always admired his huge knowledge about the world’s wines, his leadership skills, organizational abilities, and the almost endless amounts of energy and enthusiasm he brings to all the projects he is involved with. Given Ian’s current and past academic affiliations, and his having founded and cofounded numerous trailblazing wine schools all over the world, we believe Ian will help us achieve our present and future goals in further establishing a culture of terroir in both wine and food.

Ian D’Agata is the recognized world authority on Italy’s native grapes and wines: his two most recent, award winning, books Native Wine Grapes of Italy and Italy’s Native Wine Grape Terroirs (both published by University of California Press) are widely viewed as the “state of the art” textbooks on the subject. Along with his former student and best pupil, Michele Longo, Ian is also currently the co-author of the Italy section in Hugh Johnson’s Pocket Book of Wine, which with 43 editions and over 12Million copies sold, is the world’s best-selling wine guide. As a former staff writer at Stephen Tanzer’s International Wine Cellar, Contributing Editor at Decanter, Senior editor at Vinous, and writer at numerous other magazines and websites, he has also written extensively on the wines of France, Canada and other wine producing nations.

In recognition of his work devoted to the communication of wine knowledge and research, in 2015 Ian was named to Italy’s prestigious Accademia della Vite e del Vino, Italy’s association of university professors, researchers and academicians in the field of wine. Over the years, he has been honoured with numerous other awards and titles, including the Foglia d’Oro of the City of Dolegna del Collio (2007), the Cangrande medal (2011), the Comitato Grandi Cru’s “Italy’s best wine journalist” award (in 2012 and 2017; and in 2007 as the “young journalist” award winner), the 2015 Louis Roederer International Book Awards Book of the Year, the 2016 Les Plumes d’Or awards nomination by French wine producers, winemakers and chefs (associated with Le Grandes Tables du Monde) as one of the world’s eight leading international wine writers, and the 2017 Cuvée Award of Excellence (Ontario, Canada).

A trained medical doctor at the hospitals of the Universities of Cincinnati, Harvard, Montréal and UCSF, Ian has won grants in cellular/molecular biology which explains his interest and current research focus on the discovery and correct identification of forgotten native grape varieties all over the world and to have wines made from them once again.