Valentine Michaud wins the 2020 Credit Suisse Young Artist Award. The Selection Committee, which is chaired by Michael Haefliger, Executive and Artistic Director of Lucerne Festival, today announced that they have chosen her as the winner of the renowned international music award. 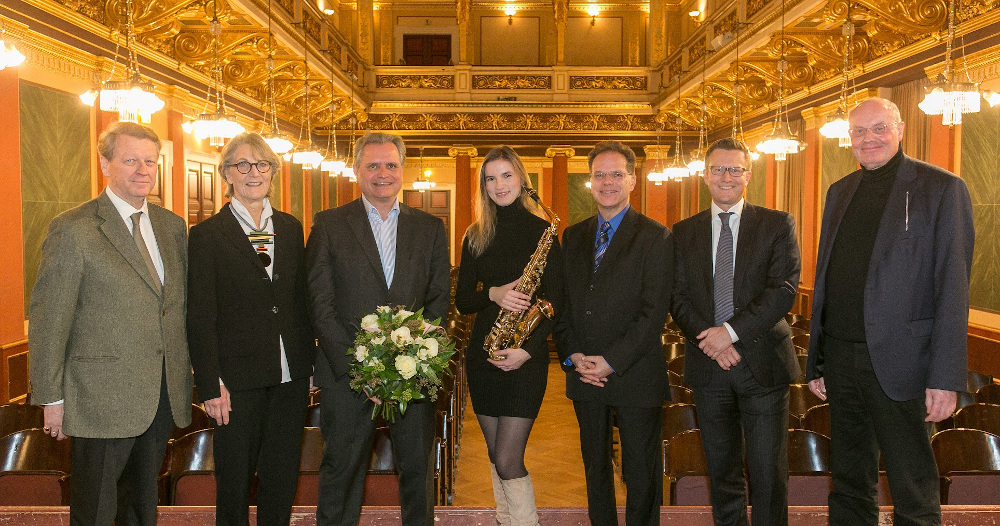 The 2020 Credit Suisse Young Artist Award goes to the French saxophonist Valentine Michaud. The Selection Committee, which is chaired by Michael Haefliger, Executive and Artistic Director of Lucerne Festival, today announced that they have chosen her as the winner of the renowned international music award. The Credit Suisse Young Artist Award, which is being given for the 11th time in 2020, includes a cash prize of CHF 75,000 as well as the opportu­nity to perform in a concert with the Vienna Philharmonic during the Summer Festival in Lucerne. The concert will take place on 5 September 2020 in the KKL Luzern Concert Hall and will be conducted by Gustavo Dudamel. For many young soloists, winning the Credit Suisse Young Artist Award has proved to be an important entrée to a major international career. Notable examples in­clude Patricia Kopatchinskaja in 2002, Sol Gabetta in 2004, and Vilde Frang in 2012.

Valentine Michaud was born in Paris in 1993 and began playing saxophone at the age of eight. She studied at the Haute École de Musique de Lausanne and, until 2018, at Zurich University of the Arts with Lars Mlekusch. She also holds a bachelor of musicology from the Sorbonne in Paris. In recent years, she has won numerous prizes, including the Swiss Ambassador Award (2019), the Prix Credit Suisse Jeunes Solistes (2017), and first prize at the Orpheus Swiss Chamber Music Competition (2016). She has performed at Wigmore Hall, the Vienna Konzerthaus, and the Tonhalle St. Petersburg. Her first CD will be released by Odradek Records (USA) in 2020. In order to renew the reper­toire of her instrument, Valentine Michaud enjoys working with composers of her generation and includes world premieres in her recitals. She also works passionately with other art forms and is a founding member of SIBJA, a collective of musicians, dancers, and visual artists.

The Credit Suisse Young Artist Award is an initiative of Lucerne Festival, the Vienna Philharmonic, the Society for the Friends of Music in Vienna, and the Credit Suisse Foundation. Outstanding young musical figures receive the award in recognition of their extraordinary achievements. The winners are given funding as well as an opportunity to perform at Lucerne Festival. The award in­cludes a cash prize of CHF 75,000 and is conferred every two years (with the Prix Credit Suisse Jeunes Solistes to support highly talented young musicians in Switzerland being given in alternating years). The maximum age is 30. Invitation to participate is based on nomination by a panel of ex­perts. Together with the Chairman Michael Haefliger, the Selection Committee consists of Professor Alexander Steinberger, Vice President of the Vienna Philharmonic; Dr. Thomas Angyan, Director of the Society for the Friends of Music in Vienna; the music critic Dr. Peter Hagmann; and Pamela Rosenberg, Director Emeritus of the Berlin Philharmonic. The previous prize winners have included Quirine Viersen (cello/2000), Patricia Kopatchinskaja (violin/2002), Sol Gabetta (cello/2004), Martin Helmchen (piano/2006), Antoine Tamestit (viola/2008), Nicolas Altstaedt (cello/2010), Vilde Frang (violin/2012), Sergey Khachatryan (violin/2014), Simone Rubino (percussion/2016), and Kian Soltani (cello/2018). Credit Suisse has been a Main Sponsor of Lucerne Festival in Summer since 1993 and supports the Vienna Philharmonic’s annual concerts.

Additional information about the artist: valentinemichaud.com