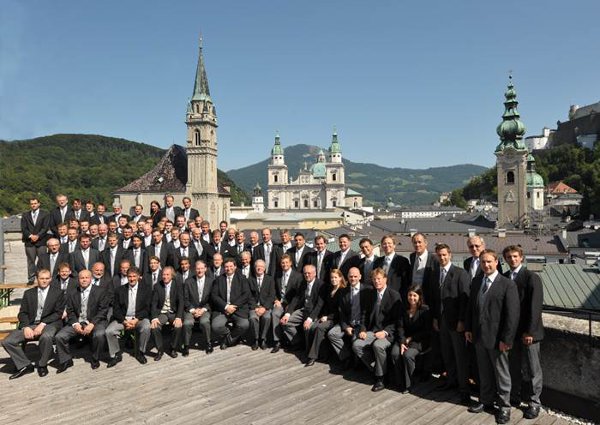 This year, the orchestra is conducted by Bernard Haitink, Andris Nelsons, Riccardo Muti, Herbert Blomstedt and Daniel Barenboim, remaining true on the one hand to its tradition of Mahler (Symphonies No. 7 & 9), Strauss (Metamorphosen) and Bruckner (Symphony No. 7), and on the other hand exploring Russia’s musical worlds – from Tchaikovsky (Symphony No. 4) via Prokofiev (Concerto No. 2 for Piano and Orchestra) to Shostakovich (Symphony No. 7 “Leningrad”).

Furthermore, the Salzburg Festival offers its audience the unique opportunity to experience the Vienna Philharmonic as an opera orchestra outside its Viennese home. This summer offers four spectacular opera productions.

Dmitri Shostakovich is featured this summer on the opera programme as well. “Lady Macbeth of the Mtsensk District is a fantastic, highly dramatic opera, full of passion, love and hatred, but also with moments of satire and wit,” Mariss Jansons recounts, who leads a staged opera production for the first time at the Salzburg Festival. Director Andreas Kriegenburg returns to Salzburg for this production.

Another special highlight will be Giuseppe Verdi’s Aida. It is conducted by Riccardo Muti, surely one of the greatest Verdi conductors of our times. Anna Netrebko, who was discovered as a singer in Salzburg, makes her role debut as Aida. The Iranian photographer, video artist and film director Shirin Neshat makes her debut as a stage director in this opera production.

The third opera production of the anniversary year is bound to be special in terms of music and staging: it is Alban Berg’s Wozzeck. Berg himself had the Vienna Philharmonic’s special sound inside his head when he composed the opera, and the Vienna Philharmonic’s many exemplary performances of this work, celebrated by audiences and press alike, have contributed significantly to the world success it has enjoyed – for example in 1951 under Karl Böhm’s baton at the Salzburg Festival. Wozzeck is directed by William Kentridge, one of the great universal artists of our times.

With Aribert Reimann’s opera Lear, premiered in Munich in 1978, the Vienna Philharmonic once again proves its ability to master contemporary music in an exemplary fashion. Lear brought the composer Reimann, born in 1936, his international breakthrough, and like few contemporary musical theatre works, it has won a regular place in the repertoire. This summer, the opera sees its 27th new production at the Salzburg Festival. Why? Directed by Simon Stone and with Franz Welser-Möst leading the Vienna Philharmonic, the Salzburg production will provide a definite answer. The music illustrates the action as a consequence of existential borderline situations – with an immediacy that touches and unsettles the listener.

“Every summer, we experience the exclusive and unique atmosphere of the Festival as musicians. It seems particularly suited to making the great masterpieces of concert literature and the all-encompassing message of music resound, and the spark of live music-making inspire the audience. It is with enormous gratitude that we think back on all the many outstanding performances with excellent conductors and soloists which we have been privileged enough to experience in Festival summers past,” says Andreas Großbauer, Chairman of the Vienna Philharmonic.

We look forward to many further star-studded highlights with this unique orchestra here in Salzburg. Do join us!