Innsbruck Festival of Early Music, Jacobs was also the one who sang the first notes in the first ever Festival concert in 1976: a cantata by the Viennese court musician Antonio Caldara. Accordingly, the 2016 Festival summer will open with cantatas by Caldara, sung by countertenor Valer Sabadus (19 July). 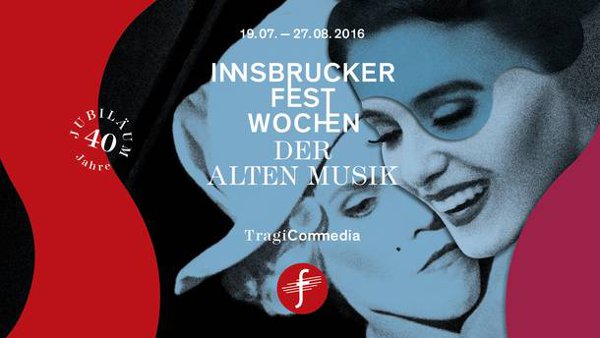 It’s not every day that you get a chance to celebrate. The Innsbruck Festival of Early Music will be 40 years young in 2016. That calls for a special birthday programme. All the musical strings from the Renaissance, baroque and classical periods will vibrate on the occasion of the anniversary: music as a companion through life with festive and contemplative sounds that oscillate between light and dark, joy and sorrow, triumph and grief, between major and minor, comedy and tragedy. Tragicommedia.

Three weddings and no funeral in the opera programme. Two young people get married in secret, thereby turning things upside down. Artistic Director Alessandro De Marchi will conduct “Il matrimonio segreto” by Cimarosa, a prime example of the opera buffa. A wedding is also on the agenda in “Le nozze in sogno”, a commedia civile, the setting to music of which was identified by Italian musicologists to be the work of the former Innsbruck court composer Pietro Antonio Cesti. The carnival opera is about the eternal conflict between the generations, such as preventing a wedding that goes against somebody’s will and bringing about a marriage of love, which the young generation cleverly accomplishes despite the older generation’s efforts. Material that was simply made for BAROQUE OPERA:YOUNG. Following various trials, Tamino and Pamina, too, are a happy couple in W. A. Mozart’s Singspiel “The Magic Flute”, performed as part of the 2016 Festival in a historical version for small ensemble as a children’s opera. The three weddings are juxtaposed with a life saved at the last moment. In C. W. Gluck’s opera “Alceste”, first performed in Vienna in 1767, the king’s wife is ready to die in his stead. But the god Apollo brings her back to life from the realm of the dead and reunites her with her husband. The ancient tragicomedy set to music by Gluck will be conducted by René Jacobs, who shaped the Innsbruck Festival between 1976 and 2009, and returns in 2016.

40 years of the Innsbruck Festival. Jacobs was also the one who sang the first notes in the first ever Festival concert in 1976: a cantata by the Viennese court musician Antonio Caldara. Accordingly, the 2016 Festival summer will open with cantatas by Caldara, sung by countertenor Valer Sabadus (19 July). The entire programme of the first Festival concert, which also included works by Bach, Handel and Couperin, will be presented again in the anniversary year on 24 August exactly. The composers featured in that first concert in 1976 reappear several times in the anniversary programme, as do the instruments played back then: the baroque violin, the viola da gamba and the harpsichord. In 2016, these instruments are the focus of special concerts given by violinist Hiro Kurosaki, harpsichordists Christophe Rousset and Andreas Staier, the viol consort Fretwork as well as the gambists from Les Talens Lyriques. The Festival will celebrate together with artists who have left their mark here, such as Giovanni Antonini, Howard Arman, Alfredo Bernardini, Amandine Beyer, Donato di Stefano, Renato Girolami and Lawrence Zazzo.

“Partly serious, partly jesting odes”. Just as in Telemann’s collection of songs, the music presented during the anniversary Festival will oscillate between sparkling wit and solemn earnestness: the Hamburg Ratsmusik ensemble with “Fortuna scherzosa”, Barokksolistene with “The early joke”, Il Giardino Armonico with “The Death of Reason”, Zefiro with Mozart’s “Gran Partita”, the “Coronation Mass” under the direction of De Marchi, lutenist Thomas Dunford with “Dowland’s joys and sorrows” and Wolfgang Mitterer playing music on the Ebert organ in the “Schwarzmander” church.