The 45th Innsbruck Festival of Early Music with more than 50 events, from 13 July to 29 August 2021, is once again filling the city with music. Take a journey through the music of the 16th century, visit musical cabinets of curiosities and coffee houses, indulge in the works of Bach, and enjoy many other musical treasures. 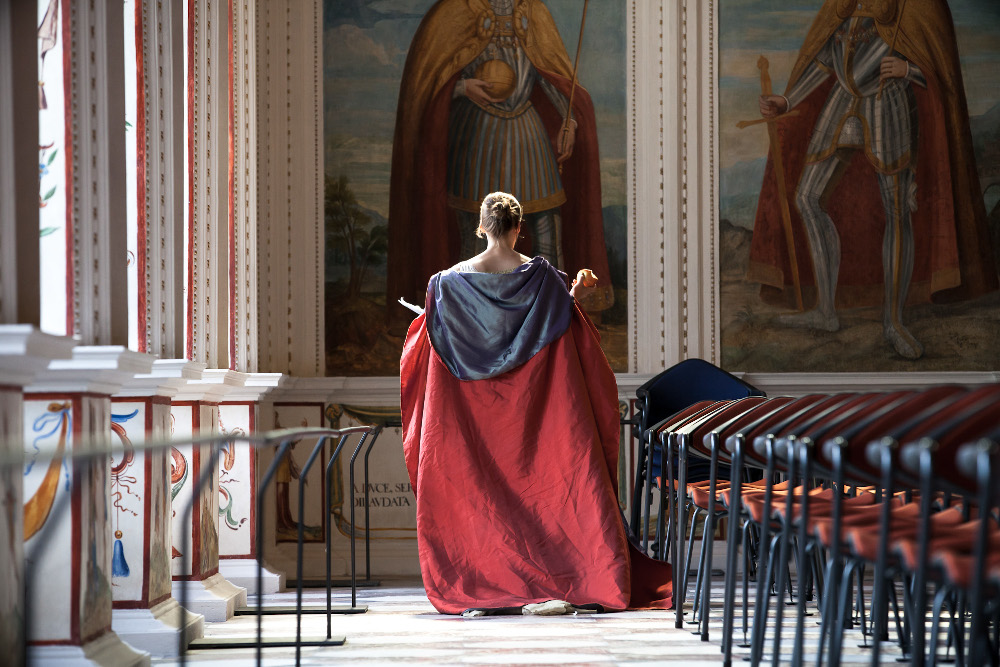 45th Innsbruck Festival. Three staged opera productions, the Ambras Castle concerts, performances of sacred music, festive concerts, musical performances in public squares and much more are being presented as part of the Innsbruck Festival. The celebrated counter-tenors Jakub Józef Orliński and Valer Sabadus can each be heard in their own festive concerts, and international ensembles such as Café Zimmermann, Il pomo d’oro, Ensemble 1700 under the musical direction of Dorothee Oberlinger, Concerto Copenhagen with Lars Ulrik Mortensen as well as I Barocchisti under the direction of Diego Fasolis are additional musical highlights. The traditional crowning finale is the final concert of the 12th Cesti Competition.

45th Innsbruck Festival. The theme: “Perspectives”
Life itself, the history of humankind, the development of culture, questions about what is necessary and relevant, visions of the future – everything is a question of perspective. So too is the view that the festival casts back on the art and culture of the Renaissance and Baroque periods, on the music that they consider worth discovering from today’s perspective, freeing it from the dust and placing it on the contemporary stage for exploration. The Innsbruck Festival would like to ask its audience and artists for their very own perspective on early music. After a period of general pause and stillness, now it’s time to refocus and immerse oneself in the oasis that is the Innsbruck Festival. This year’s panel discussion “Early music – yesterday, today, tomorrow” is also dedicated to the question of perspectives on and for early music. Dramaturge Christian Moritz-Bauer will discuss the topic with Dorothee Oberlinger (recorder player, artistic director and conductor), Lars Ulrik Mortensen (harpsichordist and conductor) and Wolfgang Fuhrmann (musicologist and music publicist).

45th Innsbruck Festival. New horizons
With the operas “L’Idalma overo Chi la dura la vince” by Bernardo Pasquini, Johann Mattheson’s “Boris Goudenow” and the “Pastorelle en Musique” by Georg Philipp Telemann, the Innsbruck Festival is once again bringing three real rarities to the stage. The opera “L’Idalma overo Chi la dura la vince”, conducted by director Alessandro De Marchi and staged by Alessandra Premoli, delighted the audience and critics alike at its première. Today, the opera, which entails the irrepressible passion of the protagonists as well as permanent confusions and misunderstandings, can be considered one of the highlights of Pasquini’s operatic work. The ensemble is made up of top-class singers, led by audience favourite Arianna Vendittelli in the title role.

A very different story is told in Georg Philipp Telemann’s “Pastorelle en musique” – a happy ending guaranteed. The plot captivates with emotional turbulence, musically staged through Telemann’s variety of styles. From German arias to French airs and comedic scenes to large choral tableaux, everything is on offer. In this co-production with the Potsdam Sanssouci Music Festival, Telemann Prize winner Dorothee Oberlinger leads Ensemble 1700 and an outstanding cast of singers, including Marie Lys, also a Cesti winner.

Both productions can be experienced this year at Haus der Musik. To optimise the visual axes for the audience, a grandstand has been specially erected in the Great Hall, thereby guaranteeing new perspectives.

As Barockoper:Jung, the political comedy “Boris Goudenow” by Johann Mattheson will be performed by last year’s Cesti finalists and prize winners. With Andrea Marchiol as conductor and Jean Renshaw as director, the audience can expect an exciting drama full of lies and deceit and the lust for power, which had to wait almost 300 years for its première. 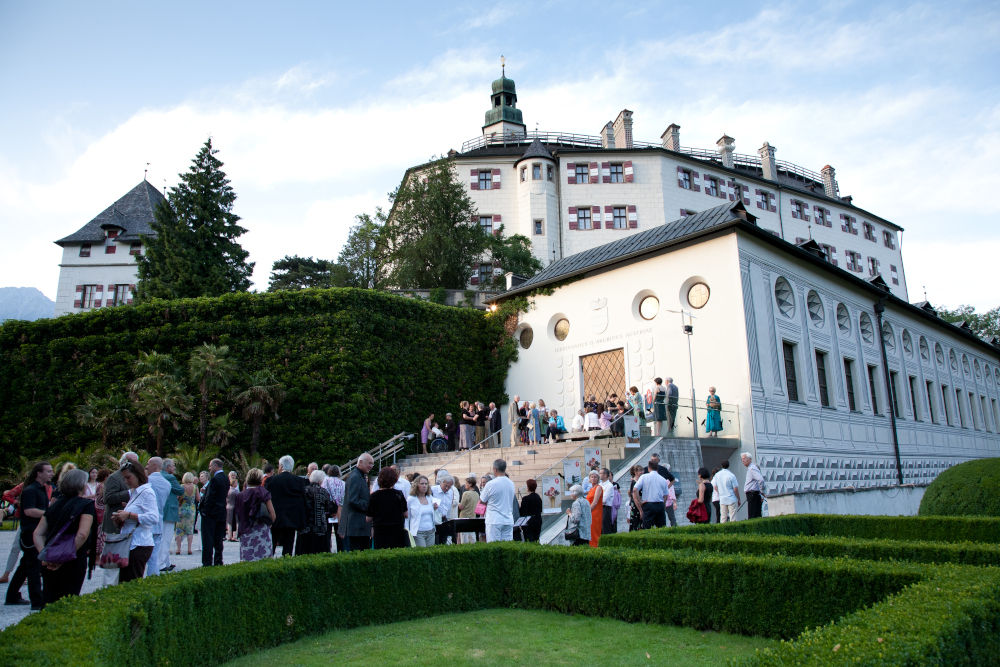 45th Innsbruck Festival. Lovers in the Baroque area, the origins of public concert life and a very special collection of songs.
The multifaceted concert programme offers numerous perspectives on the broad spectrum of early music. Who better to represent this diversity than international stars of the Baroque music scene?

The Polish shooting star among counter-tenors, Jakub Józef Orliński, skilfully portrays the many faces of love in his concert together with the ensemble Il pomo d’oro with works by Cavalli, Bononcini, Conti and Handel.

Counter-tenor Valer Sabadus is another audience favourite returning to Innsbruck. Together with the lutenist Johannes Ötzbrugger, he is presenting “A Musicall Banquet”. This collection of songs by the nineteen-year-old Robert Dowland, son of the English court lutenist John Dowland, from 1610 is a kind of cross-section of European solo singing of the time.

The Café Zimmermann ensemble will embark on a delicious culinary journey following traces and the origins of public concert life in the German-speaking world. Telemann and then Bach led the

Collegium musicum of Leipzig University for many years. It traditionally played in the “Zimmermannische Caffee-Hauß” behind Leipzig’s market square, and thus a coffee house is considered the cradle of social music life.

The Danish ensemble Concerto Copenhagen, under the musical direction of harpsichordist Lars Ulrik Mortensen, will devote itself to another famous work of Bach: The Brandenburg Concertos. Experts celebrate this interpretation as a milestone in their performance history.

With Pasquini’s “Caino et Abel” and Marc-Antoine Charpentier’s “Judicium Salomonis”, artistic director Alessandro De Marchi, together with the Innsbruck Festival Orchestra, the Coro Maghini and a renowned ensemble of soloists around Sophie Rennert and Davide Luciano, adds an extremely dramatic chapter to his narrative of the early Baroque oratorio.

The “Messa de’ Morti” in C minor by Francesco Durante is also going to stir the emotions. The renowned ensemble I Barocchisti, directed by Diego Fasolis, will perform the Requiem in the imposing setting of the court church. This very special night-time concert will bring the Innsbruck Festival to a close on 28 August.

45th Innsbruck Festival. Request concert: The audience pulls the strings
The interaction between the audience and artists at “A prima vista” is to open up completely new perspectives. The audience will choose the programme from over 300 different works of the 17th and 18th centuries. Violinist Leila Schayegh and harpsichordist Martin Zimmermann will spontaneously play the chosen programme from sheet music.

The 2016 Cesti prizewinner Lea Desandre is also back. The mezzo-soprano, who recently celebrated successes at the Salzburg Festival and the Théâtre des Champs-Élysées, is dedicating her “Amazons” concert to strong women. Together with the ensemble Jupiter under the musical direction of Thomas Dunford, she will present arias by Vivaldi, Pallavicino, Destouche, Schürmann and De Bottis, slipping into the roles of powerful queens, fearless warriors and affectionate women.

Magical creatures and wondrous things will also be presented by the artists of the Ambras Castle Concerts. In addition to Concerto Scirocco, who will transport their audience in the Spanish Hall of Ambras Castle to a time when witches, elves and other ghostly creatures populated the theatre stages, books and people’s fantasies, the ensemble Agamemnon will reinterpret the Ambras “Chamber of Art and Wonders” in music, Tasto Solo will explore the relationship between “sense and sensuality” and Al Ayre Español will open the concert series with Handel and Corelli.

45th Innsbruck Festival. From the Nordkette mountain range to the old town
As every year, the Festival is also offering a varied programme with free admission. In addition to the lunchtime concerts, which have been established for many years, and the popular “Concerto mobile”, there will be two new formats: For “Musica montana”, the Festival will take to lofty heights, allowing for completely new perspectives. The weekend will start with musicians from the

Innsbruck Festival performing songs and dances from times gone by on the Seegrube and Arzler Alm. In turn, “Aus der Zeit” will offer a reverent inward perspective. Musical time-outs from everyday life in various church rooms will invite you to linger free of charge.

After months of silence with halted cultural life, Innsbruck is now once again becoming a musical oasis. Full of excitement and curiosity, the Festival, together with its audience, are looking forward to long-awaited live performances and thrilling opera productions.
Tickets for the 45th Innsbruck Festival of Early Music will be available at all known advance booking offices from 10 May 2021.

The 45th Innsbruck Festival of Early Music with more than 50 events, from 13 July… END_OF_DOCUMENT_TOKEN_TO_BE_REPLACED

Arriva su Netflix All or nothing at all. Alex Gibney presenta Frank Sinatra, il racconto… END_OF_DOCUMENT_TOKEN_TO_BE_REPLACED